Stopped by the Moto Show on North 14th yesterday, to check out all the builds, and snap a few shots.  A couple of the MotoPreserve Members were in attendance, and the festivities seemed to be ramping up to a full-blown party…  END_OF_DOCUMENT_TOKEN_TO_BE_REPLACED 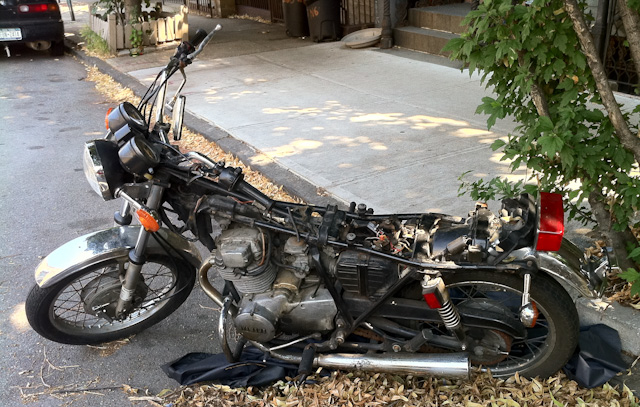 I don’t see it too often, but now and again, I come across a bike that has been abandoned on the Brooklyn streets.  Is it stolen?  Was it not running, and the owner decided to leave it, lonely and rotting?  For some reason, this type of scene doesn’t surprise me with cars.  But when I see a bike like this, it just makes me sad.

This Yamaha had a cover on it two days ago, but it fell off, and now sits naked to the elements.  There are so many people who would love to get hold of this bike, and work it back to its original glory.  If only there was a place where misfit bikes could be matched with a new owner….

Oh yeah, Craigslist.  What was this guy thinking?

The 8th annual New York City Vintage Motorcycle Show,  will take place on August 21, right here in Williamsburg, Brooklyn.  Hosted by local moto mechanic shop, Works Engineering, their block on North 14th street will be packed with various vintage scoots.  Put it in your calendars folks, it promises to be a must see event.  More detail to come…

The other day I found a guy on Craigslist who was selling a box of cheap parts, which seemed to have a few things I could use.  He was located out in New Jersey, up north toward the State line.  I decided to take this opportunity to ride up over the GWB and hit the Palisades Parkway, and make a day of it.  So I saddled up on the CB550, in a great mood, but of course the traffic gods felt otherwise, and I was stuck in bumper to bumper on 287 in Queens/Bronx for about 45 minutes.  There wasn’t even enough room to lane split for much of the time, so I waited impatiently for the hordes to get moving.

Once I finally crossed the GWB, I took the first exit off the bridge, onto the Palisades.  It’s been years since I have traveled this road, and I was now wondering why I waited so long.  Instantly you are not in the city anymore, and the road opens up to reveal a ton of trees along the sides of the parkway.

If you have never been, The Palisades Parkway is a divided highway, 2 lanes per side, with nice twists and turns at speed.  The cops can be a little nasty on this stretch closest to the city, so be careful to watch for them.  But honestly, it’s more about taking it easy, and enjoying the view.  The highway slopes up north toward the border of NY State, to the Bear Mountain part of Harriman State Park, hugging the Hudson the entire way.   Bear Mountain and Harriman are also a gorgeous ride, but that’s for another time…

There are only a few exits off the highway, and I planned on taking the 2nd one, which gives you access to a small twistie that curves all the way down to the Hudson.  This road winds along the cliffs, eventually spitting you out onto the Boat Basin landing, where people congregate to BBQ and lounge in the sun, especially on a holiday weekend.  Unfortunately, I got to the bottom of the road, and there was a park ranger waiting for me, at a sign that demands money to enter the basin.  Bullshit!  I asked if there was somewhere I could slip my bike for a minute to take a few shots, but he refused, so I turned around and was on my way.

I traveled only to the next exit where I left the highway for my destination, or should I say my destiny with a box of useless parts?

Highly recommended if you feel like taking a nice ride, complete with trees, which despite the book, still don’t seem to grow in Brooklyn…